China is a fascinating country in many ways and is the subject of many fantasies for us Westerners. Its exotic orientalism and millenary traditions have seduced Europeans since Marco Polo recounted them in his book The Travels, while Beijing’s desire for economic hegemony is worrying and even frightening. So what happens when China steps into the olive crop, one of the oldest and most vibrant symbol of Mediterranean civilization?

The brief history of olive oil in China

In the beginning there were 30 trees. Thirty olive trees, offered in 1956 by the Albanian dictator Enver Hoxha to his fellow Mao Zedong, as a sign of friendship between the two communist countries. Eight years later, Zhou Enlai, Mao’s Prime Minister, sensitive to the good reputation of olive oil for health, asked the Albanian government to send more than 10,000 olive plants and two experts to China. The adventure could begin!

The Chinese government had these trees planted in eight different provinces of the country, all located south of Yangtze, the famous « Blue River » which has marked the symbolic border between northern China, where wheat or sorghum is grown, and the south with rice fields, silk and cotton.

After two decades of experimentation, the Ministry of Agriculture designated Wudu District, along the Bailong River in Gansu Province, as the most suitable area for olive trees. And at the turn of the century, the government took several measures to support the development of a « made in China » olive oil industry, strenghtened by regular subsidies and investments. In 2016 for instance, the government released another 10 million yuans (€1.4 million) for the sector.

In parallel, the country’s opening to the world initiated by Deng Xiaoping enabled the first bottles of European olive oil to reach the Chinese market, at prices that were certainly prohibitive for the average consumer, but accessible to the flourishing upper middle class in big cities. Given the government’s dedication to a positive trade balance, we easily understand its desire to develop domestic production!

Today, the Chinese olive oil market is still limited: consumption is estimated at 45,000 tons per year, equivalent to Australia’s… yet 60 times less populated. This represents only 0.15% of the 35 million tons of the Chinese edible oil market, dominated by rapeseed and soybeans. Olive oil is actually perceived in China as a luxury product, which is often offered as a gift for its remarkable health properties, and, although it can be found in supermarkets, its price per litre remains 10 to 20 times higher than the other oils’.

In 2018, and despite all the efforts of the Chinese government, local production only covers 13% of the domestic consumption, with a 6,000 tons production. But that is already three times more than it was three years ago – and by the way, the same level as France’s production. Indeed, in the provinces of Gansu, Yunnan or Sichuan, far from the big cities consumers’s eyes, ambitious Chinese entrepreneurs supported by the government are investing the field on a massive scale, weighing a great potential, and getting ready to flood the domestic market.

We first explored Yunnan province, in southern China, to get a quick idea of the local way of growing olives and making olive oil. Then we moved on to the serious things by reaching the very centre of China, in Wudu District, located in Gansu Province, that concentrates more than 80% of Chinese olive oil production.

We were very warmly welcomed by the staff of Xianyu, the first Chinese extra virgin olive oil producer, who organized an exciting 4 days visit in Wudu district. Surprised by our approach though, even a bit suspicious at first, our hosts had hired the services of the friendly Mr Liu as a « translator ». His approximate knowledge of the english language and his job at the Governmental Forest Agency may suggest that his role was actually a but different….

But with his smile and his knowledge of the olive trees, which Mr. Liu helped to establish here in China, his escort finally proved to be very pleasant. Here is what we have discovered with him.

Scientific studies led by the Chinese Olive Research Institute highlighted the advantages of Wudu district for growing olive trees: a sandy soil suitable for a dry and sunny climate, and an unpolluted land – which is noteworthy in a country whose 20% of agricultural land is severely polluted. Moreover the absence of diseases, pests or fungi that are harmful to trees, explains why a large part of the local production is certified organic.

Many European varieties (Leccino, Frantoio, Picholine, Hojiblanca…) managed to flourish in experimental nurseries, where scientists have also developed two chinese varieties: Ezhi-8, actually giving satisfaction, and Gheggu-32 whose oil yield is not as good as expected, according to Mr Liu.

The only real challenge for olive growing in this region is the relief of the land, in the middle of a mountainous area. The bed of the Bailong River, which flows at a 900 metres a.s.l. elevation, is surrounded by peaks standing steeply to over 2000 metres. However, the authorities and local residents were not discouraged at all. Probably driven by centuries-old atavism, they simply began to dig down the mountains, as in the splendid rice fields of Yunnan, to plant olive trees up to a 1300 metres elevation.

Given the region’s low rainfall (400mm per year), it was also necessary to build an irrigation system that pumps water from the Bailong River to the top of the olive groves, from where it can then flow through the terraces. Once again, determination as well as human and financial resources are in China the key to creative solutions!

During our trip, we met three main types of olive oil producers. First of all, like Sean in Yunnan, those who would have liked to keep cultivating other crops but for whom government policies do not leave much room. Then, like Long Jin Yuan or Yu Sheng Kang in Gansu, those who foresee a promising investment but are not really passionated or experts in the matter. And finally, like the leader Xiangyu, those who are driven by a real interest in the product, looking for quality and innovation. 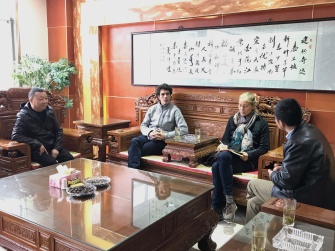 Long Jin Yuan
In all cases, the organization of the production seems to follow the same pattern. Tens of thousands of small farmers grow olive trees on their allocated land, sometimes as a single crop, sometimes alongside other crops. They sell the olives they harvest to the few entrepreneurs who have invested in production lines, paying about 6 yuan per kilo (0.85€). In Wudu district, there are only 11 companies capable of processing olives, which alone produce more than 4,000 tonnes of olive oil per year. Including 2,000 tons just for Xiangyu, which is fortunately one of the most conscientious producers. And works with 45,000 different operators.

45,000, you read it right. We are in China after all! And they need all these people to go through the harvesting of olives, which is done entirely by hand, olive by olive, from the end of October to the end of November. The steep land and the sandy soil prevent any mechanization of harvesting. As for hydraulic or electric vibrating combs, some farmers just started to use them, but it should remain confidential given the rather small surface exploited by each farmer, confirms Mr. Liu, .

On the factories side, it is the best of the best. German packaging lines with infallible mechanisms alongside the most modern Italian mills. Until… wait, is that a Chinese brand mill that we can see over there? Thus, even for a market as burgeoning as olive oil, chinese industry seem to practice technology transfer – against which Donald Trump is so mad about.

Indeed, despite the limited size of the market and the predominance of foreign olive oils, everyone here wants to believe in a consumption boom in the coming years, and is getting ready for it. As well as an improvement in the reputation of Chinese production, which still suffers from a lack of notoriety compared to European oils, although their quality is very poor, at least the ones we have tasted (rancid).

Leaving Wudu, we can’t help but think that we have only visited one tiny district in a country much larger than Europe. And that if China applies the same recipe to all originally imported products, it will soon no longer have to worry about customs barriers as its domestic production will be sufficient to cover its needs. And then conquer the world?

And click here for our articles in English! 🇬🇧