Everybody asked the same question : « olive oil made in New Zealand, are you sure ?! ». To really make sure, we travelled to the other end of the world, and met Matiatia Grove, Mount Grey Olives and Aquiferra, olive oil producers in various spots of the country. Here is what we saw and learned.

Although the first olive trees in the country were planted in 1835, to New Zealander people olive oil remained a medicine for digestion, that you could only get in pharmacy, until the 1980s. Then, some of them have gradually started eating olive oil for its taste qualities, and health properties. Simultaneously, domestic production of extra virgin olive oil began to develop.

Each year, New Zealanders eat almost 4 million litres of olive oil – one litre each – of which only 10% is produced locally. The rest is imported, mainly from Australia. A real market opportunity for local olive oil production! Nevertheless the country is struggling to develop this activity. So what are the reasons for this inertia ?

All the producers we met in New Zealand are categorical: climate is not very adapted to olive tree cultivation in the country.

On the one hand, rain: with an average annual rainfall of 2,000 mm in New Zealand (compared to 800 mm in Italy and 300 mm in Spain), the ambient humidity of olive groves favours the development of fungi, such as anthracnose or peacock’s spots, likely to cause damage to the trees and fruits at any time.

On the other hand, frost: a real threat at harvest time, between April and June, especially on the South Island. Some producers such as Mount Grey Olives, inspired by viticulture, have equipped their groves with giant fans to keep the air moving and thus avoid frost. Some other use drones, such as Aquiferra, borrowed from nearby apple growers. And those who tried to process frozen olives with the rest of their harvest have regreted it strongly: the texture, the taste, the whole thing had to be thrown away!

Last, the wind: the warm streams from Australia at spring can sometimes sterilize the olive blossoms. No flowers, no fruits.

New Zealand’s 200 olive growers can be divided into three main categories: the « hobby grove » people, who have a few olive trees among other crops – often vines – and sell their olives to larger producers. Then you have the small and medium farms, such as Matiatia Grove, Mount Grey Olives or Aquiferra, which produce their olive oil from a thousand olive trees, but do not earn enough to make it their unique activity. And at last, commercial farms, owning up to 40,000 trees and producing oils of varying quality, trying to drive production costs down to offer competitive products in local supermarkets and sometimes sell abroad to a few asian countries.

Without any family tradition in olive, all these producers have learned the job through short theoretical training, but above all in the fields, by experimenting and sharing with other olive growers and horticulturists. Furthermore, olive trees in New Zealand, all less than twenty-five years old and often giving fruits every other year, have a low yield: between 10 and 20 kilos of olives per tree only.

In 1996, the government supported the creation of Olives New Zealand, an association of olive growers, millers, distributors and experts, a forum where they can share best practice in order to increase productivity improve marketing of domestic extra virgin olive oil in New Zealand.

Between 2016 and 2018, Olives NZ funded the Focus Grove Project, a survey whose conclusion was that chemical compounds and mechanical tools would increase productivity in New Zealand’s groves. Aquiferra, that we met in Hawke’s Bay, is one of the four pilot producers in this study and today strictly applies these methods inspired by the industrial apple industry: systematic spraying of antifungals and herbicides, mechanized harvesting by shaking the trees, etc. But other producers are not willing to follow these recommendations at all. And some of them, like Matiatia Grove on Waiheke Island, keep their distance from the association and continue to use more natural methods.

A not very profitable activity

In addition to the expensive price of agricultural lands in New Zealand, these conventional cultivation methods represent a significant financial investment for growers. It happens sometimes that, facing bankruptcy, one decides to pull up their olive trees and replace them with chickens or cows, which are much more profitable on the market. This barrier to entry explains why very few new olive groves are currently emerging, and why young New Zealander people are not interested in this crop. Much to the regret of the passionate people we met.

As the production costs of quality extra virgin olive oil in New Zealand remain high, at least NZ$12 per litre according to Aquiferra, the selling price is necessarily not very competitive compared to Australian or even Spanish olive oils, imported for NZ$3 per litre. New Zealand olive oils are actually sold in small quantities (250 mL), often as gifts, or to gourmet restaurateurs who are willing to pay a fair price for locally made products, such as Roots restaurant in Littleton, close to Christchurch.

The mild taste of New Zealanders

In New Zealand, since the arrival of the British, dairy farming and butter have a central role. Local cuisine is therefore more familiar with that animal fat than with olive oil.

Supermarket shelves are filled with various vegetable oils mixed in barbecue sprays, which have as little taste as possible. John from Mount Grey Olives confirms that the New Zealand average consumer is not yet ready for oils with a strong taste, « unlike you Italians and French people ».

Most of the olive oils produced in New Zealand are very light. And when Margaret from Matiatia Grove organizes blind tastings for her compatriots, it often happens that they prefer a rancid oil, which reminds them of the medicines of their childhood… Ew! Ew! 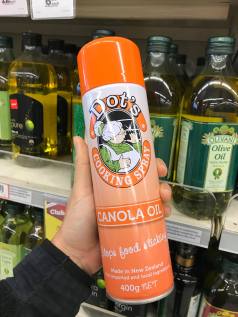 … et beurre d’olive !
There is still a long way to go before New Zealand becomes a major producer of olive oil. It will take time to educate palates, to find varieties and production techniques adapted to the climate and to turn it into a profitable and attractive activity for the younger generations.

If you want to know more, always more: